The Gran Premio was Legnano’s second-tier ‘corsa’ model, that to the best of my knowledge, was released in late 1958 or early 1959 coinciding most likely with the large end-of-year bike shows in Italy.  The Gran Premio isn’t drastically different from the Roma Olimpiade that had a slightly lighter frame weight by approx. 0.5kg (approx. 1.1lbs) keeping in mind that counting grams was not as huge then as it is today.

And in the first few years of the Gran Premio model, the majority of the Campagnolo and other components were pretty much the same with the exception of the Campy Sport hubs on the GP versus the Record hubs on the Roma model.  Noting that the Roma Olimpiade Campagnolo model was fitted with the Record one-piece aluminium crankset that Campy brought to market in 1958.

That brings us to this Gran Premio frame from 1960-61 that was posted to ebay not long ago by Alessandro Nati of Arvello, IT.  I have purchased a few bikes from Alessandro over the years, including the very first condorino in the collection (link).  What is most unusual about this Gran Premio is that it is the first I have seen with rear dropouts for either the Campagnolo Cambio-Corsa or Paris-Roubaix shifting system.

In this case the rear dropouts have 19 teeth on the upper face for the Campy Paris-Roubaix single rod shifter with the preceding Cambio-Corsa dual rod shifter having 17 teeth on the rear dropouts.  A reader who is more of a Campagnolo export may want to confirm or correct me on that detail.  Again, this is the first time I have seen this setup on a Gran Premio and it does not appear in any of the early Legnano catalogs in my collection. 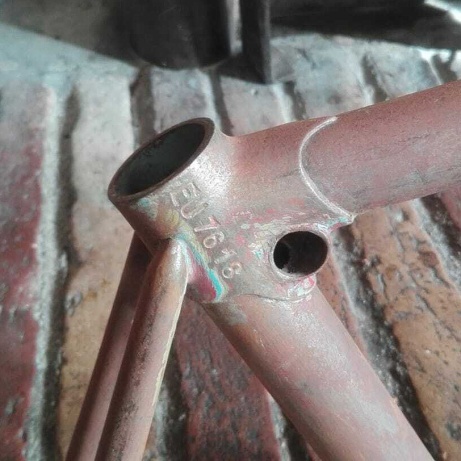 In the photo above you can see that the serial number EU7616 is oriented vertically on the right side of the seat lug as well as the method of fitting and brazing the seat stays to the seat lug, both are the production format of the Gran Premio vs the Roma.  Noting that these details were also common to other Legnano models down the line as well.

The other detail that is unusual to a Gran Premio frame is the internal routing of the rear brake cable through the top tube. The routing of brake and shifter cables through the frame tubes has come in an out of use over the decades of frame building.  For Legnano, this detail is often found on early Tipo Roma frames but seems to have left their production process by the late 40’s to very early 50’s.  So it is curious to see this detail on a 1960-61 production frame.

The other detail that is peculiar on this frame is the absence of plating on the rear stays although it has survived or is in place on the head tube and head lugs.

Well what can we make of this frame?  Is it a Gran Premio? Given what I have come to learn about Legnano production over the years I am not really sure that I can define this exception.  Perhaps it was a special factory order?  There is also the possibility that this is a lesser model that was reworked to add the Campy Paris-Roubaix rear dropouts and through frame cable routing for the rear brake.  Was it done for untoward reasons?  No one will ever no I suppose however I do want to make clear that if this frame was reworked it was not at the hands of the reseller Alessandro Nati who I now is an honourable person.

I hope you have enjoyed this short episode of “Sherlock Holmes and the Mystery Gran Premio”.  If nothing else it is a good reminder of taking a close look at old iron and what may or may not be.