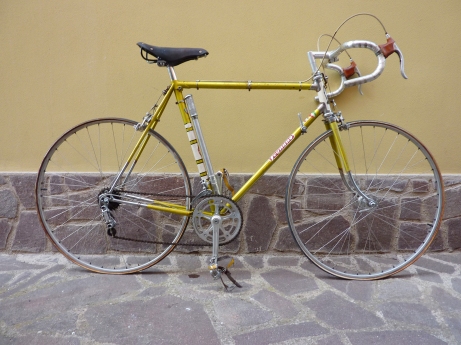 This Roma Olimpiade came to me in August of 2016 with the kind help of Silvio Antoniuccci, the webmaster for  www.registrostoricocicli.com  in Italy, a historical cycling association that I have referenced several times on this website. I have just unpacked the bike from the shipping container and loosely assembled it on my shop stand to get a closer look at this latest addition to the Legnano Collection. While I have left this bike dated to 1963 based on the serial number, however there are some components on this Roma that are raising some questions in my mind around that date.  Let’s take a closer look.

For one, the cantle on the Brooks Campagnolo model saddle is stamped ’60’, representing the year of production. This special production Broooks B17 saddle with the narrow seat rails and the matching Campagnolo seat post were released in 1958 and reports suggest they were produced through to 1963, however the latest date stamp that I have come across on these saddles is 1961. If a reader has one dated later than 1961, a photo would be greatly appreciated.

You will notice in the pictures below that the pin of the seat post looks to have undergone some light polishing as it is pretty fresh looking compared to all of the other aluminium parts on the bike that show some oxidation and road grime. However despite the dating on the cantle, it is conceivable that the saddle sat in Legnano inventory, or it may have been a shop upgrade when the bike was originally purchased. All are possible, none are certain.

The wheels are built with Fiamme ‘Cerchi Elmo’ green label tubular rims and high flange Campagnolo Record hubs with the barrels engraved with the Legnano logo. This rim/hub combination was standard for tubular wheels on Gran Premio models starting in 1960 however most factory Roma builds that I have come across during these years used the same hubs with the lighter Fiamme red label rims. That said, wheels take a lot of wear and tear and they could have been rebuilt with the more robust Elmo rims, or the shop owner swapped the reds for the greens when the bike was purchased at the request (or not) of the purchaser, or it was just a change that Legnano made from time to time as the catalogs of the era do not define the specific rim models.

The locknuts on the front hubs are stamped ’60’ and the rear locknuts are stamped ’62’. While it is not unusual for the Campy locknuts to predate the production date by a year or two with factory inventory rolling over from one year to the next, it is a little unusual that the front hubs predate the bike production by 3 years. However both wheels appear to be a set as the spokes, wear and tear and overall oxidation are identical.  Who knows, maybe that ’60’ front hub got pushed to the back of a shelf or it was mislabeled in the stock room.  If you think about it, what reason would there be for a Legnano employee to pull a locknut on a hub before building up a wheel as I am sure they just drew from inventory as orders were filled.

All of the other components on the bike are correct and in final consideration of the questions raised, I am confident that the production year for this Roma Olimpiade dates to 1963. However I wanted to walk through this in some detail to give the reader a glimpse of how vintage bikes that ‘look original’ may not be quite as original as you may first think. And while there are dishonest people out there looking to defraud buyers with ‘original’ bikes that are not, it is not the case with this Roma. However as the years pass and the value of the great vintage ‘marques’ increase, any prospective buyer should take a really close look at all the details if the seller is claiming that the bike is original to the day it rolled out of the shop.

This Roma was originally purchased from Casa del Ciclo in the city of Perugia, the capital of the Umbria region in central Italy.  A quick Google shows that Casa del Ciclo is still in business selling scooters and motorcycles.

By all accounts, 1963 was the last year for the Brooks Campagnolo model saddle and matching Campy narrow rail seat post, however personally I have only come across these saddles dated from 1958 to 1961. If there is a reader out there that has come across a 62 or 63 model, I would welcome a photo for reference. Worth noting that the seat post stem looks to have undergone some light machine polishing and it is pretty fresh looking compared to all of the other components on the bike.

1963 was the first year for the Campagnolo Record rear derailleur that was produced through to 1966 when it was replaced by the Nuovo Record derailleur. The Record could easily handle a 26t cog and possibly a 28t, whereas its predecessor the Gran Sport topped out at 24t in most setups.  The Record also offered better shifting than the Gran Sport, comparable to its successor the Nuovo Record. Personally this is one of my favourite Campagnolo components.

The final release of the Campagnolo Record crankset with 151mm bolt circle diameter and minimum 44t chainring. This setup is classic ‘half step’ gearing with a 47t inner ring and a 50t outer chainring.  The ‘Special Record’ crankset that was released in 1966 (renamed the Nuovo Record in the Campy Catalog #15 of 1967) reduced the bolt circle diameter to 144mm and was capable of fitting a 41t inner chainring. Coupled with the Nuovo Record rear derailleur the Nuovo Record crankset permitted a much wider range of gears and pretty much ended the ‘half step’ gearing setup of the previous 15+ years.

Here is a blueprint of the bike: