It has been my understanding that offshore products in Argentina have always been expensive due to high import tariffs, currency manipulation along with the shipping costs to that part of the world. So it came as somewhat of a surprise to find so many Legnano bicycles and enthusiasts in Buenos Aires and neighbouring Montevideo, Uruguay with many letters over the years.

In a 2017 article by James Roberts of the Heritage Foundation he writes, “Import substitution countries came to rely even more heavily on imports, while the goods they produced were of inferior quality and not competitive in global export markets. And nowhere did this reality become more painfully obvious than in Argentina.

Roberts goes on to say, “In 1930 Argentina was one of the 10 wealthiest nations in the world. Today, according to the CIA, income per capita in Argentina ranks 87th, lower than in Russia or Kazakhstan. It is also lower than next-door Chile, a nation that turned away from Import Substitution in the 1970s and implemented market-based reforms.”

In 2018, the Argentine import tariff on bicycles was 19.1% just shy of the world’s highest important tariff of 20% that is charged by Angola, Burundi and Batswana (source).  Add to that a 21% VAT tax at the retail level and Argentina remains a very expensive place to purchase a bicycle. And while this article is unlikely to impact Argentine government policy, this wall of taxation is a real shame given what we know of the health and environmental benefits of cycling.

This quick historical sketch reflects the many letters I receive from Legnano enthusiasts looking to restore some of the oldest Legnano bicycles that I have come across outside of Italy.  Many passed on from grandfathers, these very old Legnano bikes have been kept running despite the shortest of replacement components and the extremely high costs of importing period correct components to complete a restoration.

This brings me to a recent email from Giancarlo Guglielmo and a photo he sent along of an older Legnano with a decal on the seat tube that reads ‘Ciclo Legnano Argentina’ in the traditional crescent shape surrounding the illustration of the Lombard warrior Alberto Da Guissano. 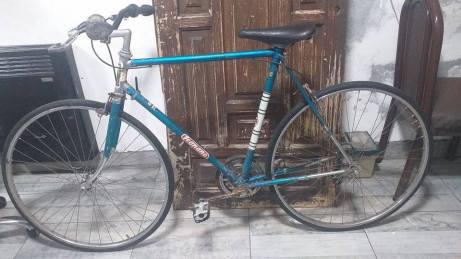 The bike also sports the Legnano brass badge of the Lombard warrior on the head tube. It is hard to say if any of the components are original given the aforementioned efforts to keep bikes serviced in Argentina as components wear.

As for the frame, it does not appear to have been repainted and the chrome plating on the head lugs, front forks and rear stays would suggest it was produced in the 50’s or 60’s.  Perhaps a Mod.53 based on the stamped steel dropouts but difficult to be certain.

However what is not typical of a Legnano from this period is the absence of the unique seat binder bolt and the style of the frame lugs. This raises a question in my mind as to the possibility that Legnano authorized production in Argentina to address the aforementioned import tariffs.

I would be very interested in following up this possibility if a reader in Argentina or former shop owner may have some additional information to contribute.  If so, please write to info@condorino.com.

I no sooner posted this article when Giancarlo Guglielmo came to the rescue once again.  You will recall from an earlier post that Giancarlo and his brother Riccardo were responsible for the hypothesis that explains the two-digit codes used by Legnano to designate the year of production after early 1966 and through to approx. 1971-72.

So here we have it.  Yes, Legnano did authorize and/or support frame production in Argentina as presented in this series of local advertisements (below) that Giancarlo believes are dated to 1953.

This first ad (above) is for the Christmas shopping season noting that summertime in the southern hemisphere is the winter season in the northern hemisphere.  Translated, the copy below the Legnano logo reads, “The world famed bike…that is now made in Argentina with the pride of our industry, under licence of Emilio Bozzi di Milano”.  The illustration would appear to be of a Tipo Roma model however it is not certain which Legnano models were manufactured in Argentina.

This advertisement is interesting as it promotes the seat lug and binder bolt that has always been unique to the Legnano brand.

The above advertisement (in the traditional Legnano graphic style) also shows us that there was a Legnano race team in Argentina. The other prominent reference in these advertisement is to S.A. LORD the licensed producer and/or sales organization for Legnano in Argentina.  Mr. Goggle hasn’t turned up much on S.A. LORD however there is a website for a shop or seller in Buenos Aires with the name LordBike that may be the remnants of this relationship with Legnano and worth checking out.

Once again, my thanks to Giancarlo for putting together another piece of Legnano history for all of us to enjoy.  Let’s hope we will hear from some Legnano enthusiasts in Argentina that can take the story a little further.