First, a very Happy Easter to all my readers who observe this holiday and a special “Buona Pasqua” to my many friends and followers in Italy who have suffered such a tragedy in these past weeks. My heart is heavy with grief to everyone everywhere who have lost family and friends in the pandemic. Let us be hopeful and find strength on this day of the resurrection to live better, to be better people and to always be kind to one another.

This wonderful condorino from Atala, produced in 1960, is now on the way to join the ‘collection’ with the help of my friend Mario Erlotti in Milan. And what a beautiful and completely original example it is of the classic condorino style.  Here is a short history of Atala courtesy of Steel Vintage Bikes.

“Atala bicycles were founded in 1908 by Guido Gatti, only a year before the first ever Giro d’Italia. The brand were direct rivals with Bianchi, who wanted to begin an Italian equivalent to the Tour de France in collaboration with the newspaper Corriere dell Sera. Gatti, however, found out and brought the story to the pink pages of La Gazetta dello Sport who undercut Corriere dell Sera and begun the story of the Giro d’Italia themselves.

Although Gatti had produced bicycles under the Atala name since 1908, the brand weren’t formally founded until 1921. Cesare Rizzato joined the company and helped to produce a series of motorcycles between 1924 and 1934, as well as support a series of teams in professional cycling to further establish the Atala name.

Atala, therefore, were a key part of Italian cycling history. Gatti and Rizzato’s brand sponsored teams from as early as 1910 to the late 80s, winning 36 Giro d’Italia stages between 1948 and 1987 and taking a series of track World Championships with the Swiss rider, Urs Freuler.

A period of crisis followed the late 80s as labour costs in Italy rose. The brand was sold to the Rizzi family in 2002 to form a new Atala franchise, but before long they too had to sell the Atala name to the Accell group, who continue to produce leisure bicycles with the Atala logo to this day.”

The condition of this condorino is remarkable for being 60 years old, still sporting it’s factory finish and every small detail.  This Atala is also a great example of the how extensive was the branding of so many of the parts and components during those years.  The Campagnolo Sport hubs were branded for Atala as was the case for many of the big Italian brands that Campagnolo supported.

Please enjoy these photos as provided to my by Mario. 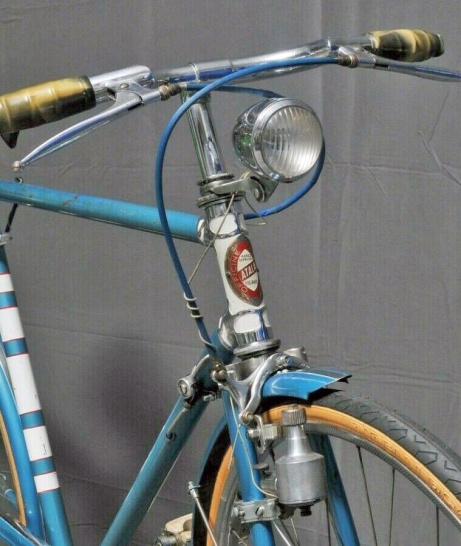 On first look one might expect the brake callipers to be from Universal as is the case on so many vintage Italian road and sport bikes. However to my knowledge Universal never branded their brakes for any of the Italian bike brands.  The 1950 Emilio Bozzi parts catalog would suggest these callipers may have been produced by Ariz and branded for Atala.

By all accounts, the headset is from Gnutti described in an early catalog as the ‘Tipo Frejus’ that has been knurled with the Atala brand name.  The Gnutti Carlo Group was founded in 1920 and is today a large company producing high-precision engine parts with worldwide distribution but no longer bicycle components.

The lugs would appear to be the Tipo Brianza Sportiva as produced by Agrati, a company dating back to 1939 in Brianza (Lombardy) that today is a large worldwide manufacturer of fasteners.  So many of the early Italian bicycle component manufacturers faded away by the early 1970’s and it is always great to see those that survived even if no longer producing bicycle parts.  And I can just make out the brand Danzi on the front light and dynamo. 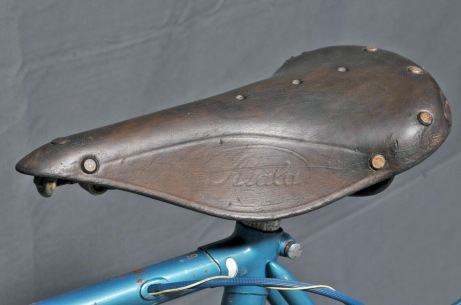 The original Italia Tipo B17 saddle branded for Atala is still in great condition.

The front and rear hubs are both the Campagnolo Sport model in chrome plated steel with the hubs engraved with the Atala logo as Campagnolo did for most of the big Italian brands through until the later 1960’s. 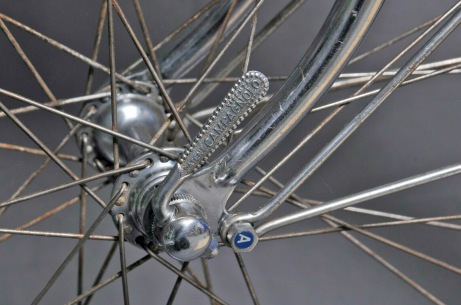 How special it is to see that even the original attachment bolts for the mudguards/fenders were not lost over the years. 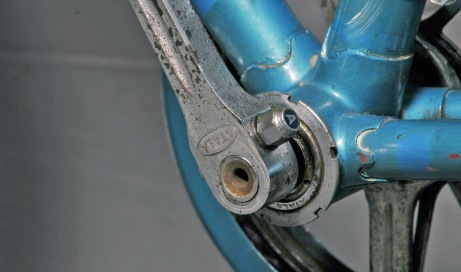 Checking my parts catalogs from the period, they would suggest that the crankset and bottom bracket were both manufactured by Fratelli Brivio (F.B.) and you can see in the photo above that both were engraved with the Atala logo and wordmark. 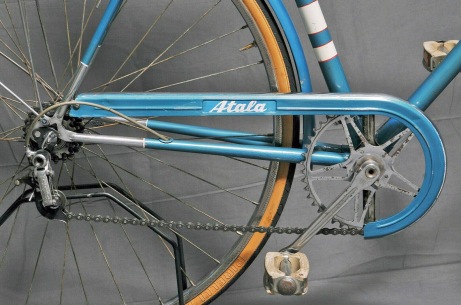 The Campagnolo Sport derailleur and three speed/sprocket freewheel where pretty much the standard setup for all condorino bikes during the 1960’s.  Seeing in this last photo that the pedal end caps are also branded for Atala but the maker of the pedals is not clear, perhaps Way-Assauto.