The frame is now with Noah Rosen at Velocolour so the only fun left for me at this point in time is to begin cleaning, checking and repairing (where necessary) all of the bits and pieces that make up this ’58 Roma. It will be an enjoyably slow process and with no particular sequence to the cleanup other than what interests me first and I am sure there will be a bit of jumping around.

However ‘fixing bikes’ is not a tedious process for anyone that enjoys the ‘zen’ of taking apart and putting back together mechanical assemblies.  In fact for those of us caught up in this pleasure it has a way of making you feel that all is right with the world and right with you at the same time. An illusion perhaps but I can’t seem to get enough of it and more than two or three days without cleaning up some old bits of something or other leaves me very wanting and probably a little grumpy. So it is a tonic I do my best to take each and every day.

The header photo for this part of the ’58 story compels me to begin with the Legnano-branded Campagnolo 1035 Record hubs. After cutting away the corroded spokes and freeing the hubs from the rims, I can get to it. Unless they were neglected, the early Record hubs are almost bullet proof and everything on this set, even after 55 years are in very good order with just a slight amount of even wear on the bearing cones. A heavy duty degreaser took care of the old grime, a steel toothbrush to clean up the axles and locknuts, a fresh set ball bearings, a quality lithium-based grease and a good bit of polishing with Wenol put them both shining and spinning like tops. 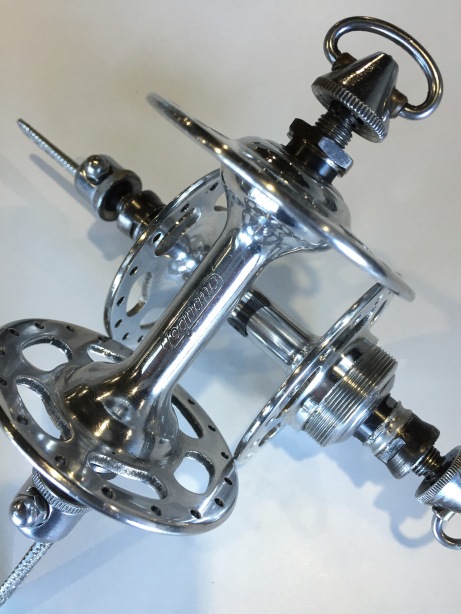 As previously mentioned, the lock nuts on both hubs are stamped ’57 and you can see the enigmatic ‘open C’ stamping of Campagnolo on the QR levers. The Velo-Retro Campy Timeline notes that the more familiar ‘closed C’ stamping of the Campagnolo wordmark took over in 1958. From my experience it would be near impossible to locate a set of these hubs with the correct vintage had they been missing from the bike. And another reason for old bikes, particularly the really good ones, to be kept together and not ‘parted out’ for the sake of a few extra dollars or euros on eBay.

Since my hands are now black with polishing compound, I might as well move on and clean up the Campagnolo Record 1052/1 front derailleur. Campagnolo introduced their new parallelogram design in 1958, replacing the older Gran Sport 1005/2 ‘Matchbox’ front derailleur (below) that had been in use since 1951. 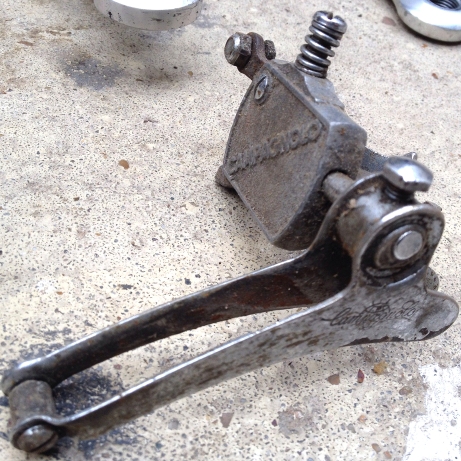 The new Record front derailleur provided greater leverage and with that came more accurate shifting, quickly replacing the simpler ‘plunger action’ of the Gran Sport model on top end road bikes. The Record front derailleur is also a beautiful design that speaks to the harmonious blend of engineering, manufacturing and form that forged the Campagnolo brand and set them apart from all other makers for decades. 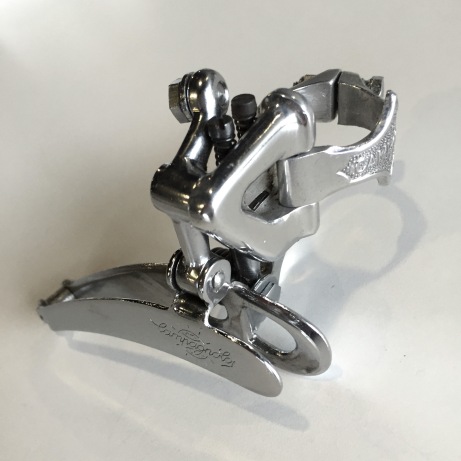 In the above photo you can see this early version of the Record front derailleur had a cable stop running down from the clamping bracket.  By the early 70’s (as shown in Catalog 17) the cable stop on the Record front derailleur was eliminated to allow for an exposed cable running directly from the front downtube shift lever through a brazed-on guide (above or below the BB).

The Record 1037 pedals that were released by Campagnolo for the 1958 season and shown in Catalog 14 of that same year. These first Campagnolo pedals had a shorter, spindle mount threading so they would not protrude beyond the arms of the widely used Magistroni steel cranks. In the early 60’s the threaded portion of the spindle mount was lengthened to match the thickness of the Campagnolo aluminium crank arms.

The first generation of Campagnolo Record aluminium cranks were prone to some stress fractures where the drive side arm meets the chainring spider. It didn’t take long for Campagnolo to rectify the problem however some competitors were cautious and preferred the traditional steel Magistroni crank arms fitted with either Simplex or TA aluminium chainrings as a compromise until such time as the forged aluminium crank was fully proven. Keep in mind that there were no team cars with replacement bikes for the Giro and TdF competitors in those years so if your bike went, so did you.

One of the smaller components on the bike are the Gaslo handlebar end plugs that were branded for Legnano. Gaslo was a popular brand of cloth handlebar tape manufactured by Tesa, now a multinational company.  I have not been able to learn if Tesa acquired Gaslo at some point in time or if Gaslo was a Tesa brand from the beginning. The Gaslo bar end plugs were actually manufactured by Beiersdorf S.P.A. of Milano.

Anyone who has undertaken an early Legnano restoration knows these bar end plugs are often missing from the bike, hard to find and sometimes fetch more than $100 when they do surface online. I have also seen these rare aluminium bar end plugs branded for Bianchi, Legnano and Frejus (the other famous Bozzi marque), otherwise they embossed with the Gaslo logo.