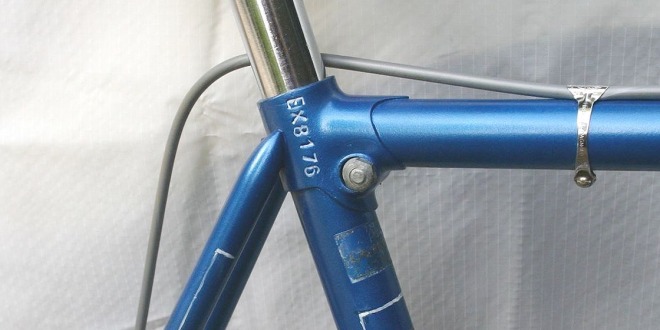 This 1961 Gran Premio is just in the process of getting packed up by its current owner in Wilsonville, Oregon before making its way to Toronto via Bikeflights. I haven’t mentioned Bikeflights before on this site as I do not generally make endorsements however they offer a great service that simplifies the shipping process, taking care of any import/expert paperwork required and all at a very competitive rate.  I have also never experienced a single problem with BF so I thought it fair to give them a nod of thanks after the many years they have helped me out.  I believe much of their day to day business is shipping and returning bikes for people attending events or tours in different parts of the country as well as overseas.

This Gran Premio looks to be in original condition although the Fausto Coppi branded leather saddle that I have not seen before will need to be checked out. And the wheels look a little suspect as well. As I have mentioned before, it is getting harder and harder as time goes by to find Legnano bikes that have not been modified in one way or another over the years. It is also getting harder and more expensive to find the correct period parts to put the bike ‘right’ if that is what you want to do.

This Gran Premio is in metallic blue rather than the quintessential Legnano ‘lizard yellow’ finish and it has been either touched up or lightly resprayed at some point in time based on the photos. That said I will most likely put the frame into the queue to be refinished by my good friends at Velocolour that have worked with me for many years now on the collection. To the best of my knowledge, the blue finish was introduced by Legnano primarily to support their sales in the USA as the traditional ‘lizard yellow’ colour did not appeal to everyone on this side of the Atlantic. A metallic ruby red paint scheme was also popular here in the 60’s and early 70’s and to a lesser extent a metallic emerald green and white paint scheme.

Here are a few pictures of the bike as I wait for it to arrive and get a better look at things. 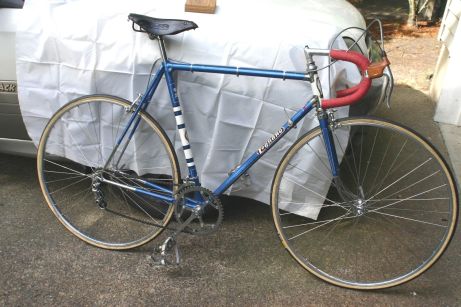 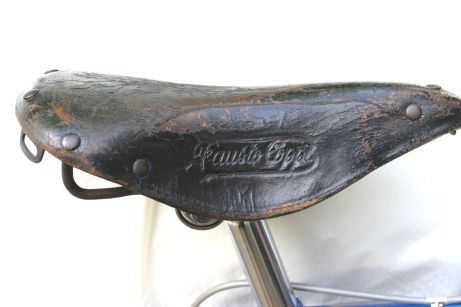 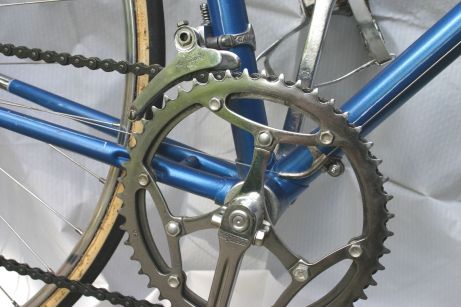 Well the bike arrived safely and without any issues. Always a relief and I am always thankful when the seller uses a good amount of bubble wrap, zip ties to keep things stable and especially some blocking or an old axle between the front fork ends . . . just in case the box gets squashed or dropped off the truck.

Now that I can take a closer look at the bike I have passed along a few questions to the previous owner that may help to clarify some things. That said, I am of two minds about this Gran Premio. The first is that a handful of the components were swapped out and/or upgraded over the years. Second, that the bike was built up from the frame with essentially ‘period-correct’ components by a relatively knowledgeable individual. Both are entirely possible and it is good to remember that unless you know the specific history, anything is possible with bikes that are 50+ years old irrespective of how they may appear.

Wheels:
Wheels are often replaced due to wear or damage, now and in the past. The wheels on this bike have definitely been rebuilt since 1961 give the condition of the straight gauge spokes that originally would have been double butted. The rims are period correct Fiamme red label tubular type however the sidewall wear on the rims and overall condition is too new for the better part of 60 years old, so probably NOS (new old stock) when they were built up.

The three-piece Campagnolo low flange Gran Sport hubs are also in excellent condition with little to no corrosion on the chrome steel barrels. So like the pristine Fiamme rims, a little too good to be realistic for 50+ years of use. The very first release of these hubs in the 50’s were produced for Campagnolo by Fratelli Brivio however these are a later release and true Campagnolo production. The hub skewers are also period-correct with the open C format of the Campagnolo word mark on the skewer levers.

These early three-piece Gran Sport hubs continued to be listed in the 1958 Campagnolo Catalog 14 and available well into the 1960’s so yes, they are period correct to this 1961 Gran Premio.  However I have yet to come across a ‘factory-correct’ Gran Premio that was fitted with anything other than Campagnolo high flange Record hubs (Legnano engraved on the barrels) and some use of high flange Simplex hubs in certain markets.

Crankset:
The Magistroni cottered crankset engraved with the Legnano logo is also correct however the ’66’ stamping on the back face of the crank arms indicate that is was produced in 1966 and is therefore a replacement for the factory Magistroni steel crank that would have been stamped ’61’. The factory original could have been damaged and replaced in 1966 . . . or if this Gran Premio was built up from a frame, this date stamped was either overlooked or it was the oldest replacement crank the owner could find.

Saddle:
Sella Italia could have made this ‘Coppi’ branded leather saddle. However here again I have never run across this saddle on a Legnano bike and it is far more likely to have been branded for use on a Coppi road bike (produced by Fiorelli) in the late 50’s, early 60’s. As Fausto Coppi rode for Legnano prior to the second world war it does add a nice touch to the bike but it is not factory correct and this Gran Premio was most likely fitted with either a Brooks B17 saddle or Robur leather saddle.

Headset:
With the word Legnano ‘knurled’ onto the outside face of the upper cup, it is a very nice headset that was most likely produced by OFMEGA ( possibly Way-Assauto) in was common to Legnano models in the late 70’s (see 1979 Legnano Competizione). The factory headset on this Gran Premio would have been supplied by Magistroni as per the crankset and bottom bracket. The only other headset used by Legnano at this time was the first generation Campagnolo Gran Sport on some Roma Olimpiade production.

Brake callipers and levers:
The bike is fitted with Universal 51 sidepull brake callipers and Universal 61 brake levers.  Both were available for this 1961 Gran Premio at the time of production however the brake levers show very little wear or scuffing which makes it difficult to believe they are the factory originals. As for the Mod.51 sidepull callipers, they could be the factory originals however there is a mounting boss on the back of the seat lug for the Universal 61 brake hanger suggesting otherwise. That said, this boss may have been a standard production detail added in 1961 to anticipate the new Universal centerpull brakes that were released in that same year. The serial number registry on this site does show Gran Premio models fitted up both calliper formats in 1961, so this one could go either way.

So in summary, it is impossible to determine the component history of this Gran Premio but clearly it is not the same today as the day it rolled out of the factory in 1961. Does it matter? Well, I wanted to go through some of these issues or possibilities, as you should in purchasing any vintage bike that is said to be factory original and if that claim is important to you or the price that the seller is asking. Factory original Legnano bikes do still exist and I have several in the collection however they are getting fewer and farther between as the original owners enter their golden years.

As it turns out, my suspicions above are pretty spot on. The individual in Oregon that sold me the bike was kind enough to fill me on the recent history of the bike which he purchased on eBay about 13 years ago as a bare frame (including the bottom bracket and sit pin). He then scoured the internet to put together period-correct and reasonably priced components, recalling that a straight set of Fiamme tubular rims were the greatest challenge in bringing it all together. And I must say that he did a very good job of it as everything IS period correct if not exactly factory correct on this Gran Premio.