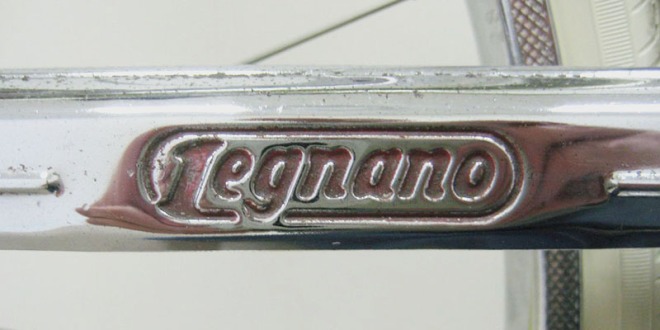 Most Legnano aficionados agree that the best if not the most sought after Legnano bicycles were produced prior to 1970. Come the 70’s the alphanumeric serial numbers were abandoned, the unique inside position of the seat binder bolt that defined a Legnano frame disappeared and the beautiful brass head badge of Alberto da Giussano was replaced with a decal.  Without these unique markings it is also somewhat more difficult to accurately date and authenticate a Legnano bike or frame.

Campagnolo, Magistroni, Fiamme and Universal were the primary component suppliers to Legnano, well known names that are very familiar to North Americans as well. And it would not come as a surprise to anyone that there were very, very few if any non-Italian components to be found on a Legnano bicycle or any other Italian bicycle for that matter. This had a lot to do with the high trade tariffs that existed between countries at that time. So much so that Campagnolo and F.B. established a production facility at Cognin, France in 1948 and some Simplex components were manufactured in Italy.

What was also common to the Italian bicycle manufacturers of the era was the ‘personalization’ of their components from the various suppliers including Campagnolo. Hubs, cranksets, pedals, handlebars, stems, brake levers, and saddles were all moulded, stamped, badged or engraved with the Legnano logo in lieu of the original maker’s mark. Whatever the reason for this total branding, it added a truly unique quality to the bicycles of the era that is highly sought after by collectors today. However this practice pretty much came to an end in the late 60’s and coincidentally about the same time that many of the Italian component makers started to disappear, with the exception of Campagnolo of course.

Campagnolo
To the best of my knowledge, the only components that Campagnolo ‘cross-branded’ were their hubsets (early Gran Sport and Record), including such famous marques as Legnano, Frejus, Atala and Bianchi however there were probably others. This practice seems to have disappeared by the mid to late 60’s as Campagnolo began to realize the commercial importance of promoting their own brand exclusively. It was also about this time that Campagnolo began to put pressure on their sponsored riders to use only Campagnolo components in competition. I should mention that not all hubs stamped Legnano were supplied by Campagnolo. Gnutti and Atom also engraved their hubsets for Legnano going into the 70’s on some of the lesser models and as the traditional Legnano quality began to fade. 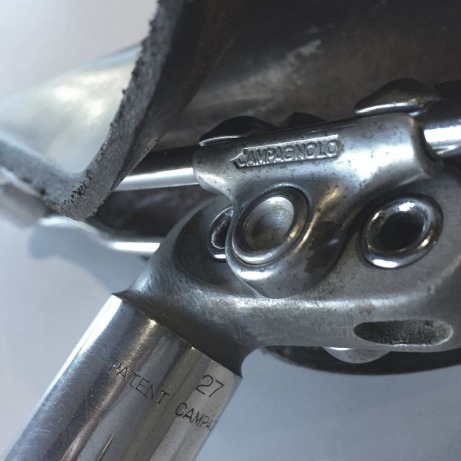 Brooks of England
Before we leave Campagnolo, it is worth referencing the Brooks Campagnolo model saddle that was produced for only a short time between 1958 and 1963 and exclusively for Campagnolo. The 1950 Emilio Bozzi catalog shows quality leather saddles from the maker Italia, however Brooks leather saddles had a worldwide following with racers.  The Brooks B17 Campagnolo model had narrower rails that provided a great deal more fore and aft adjustment for racers than the conventional Brooks B17 saddle. To facilitate the narrower rails, Campagnolo made a special narrow rail seat post during these same years to bring it all together.  The top of the B17 was also embossed with an oval mark with the words Campagnolo Model.  This saddle and post combination was used on some Roma models but not all models.

Magistroni
Magistroni was the main supplier of cranksets to many of the Italian bicycle manufacturers including Legnano. Not only where the crank arms stamped with the Legnano logo (just below the bottom bracket axle), the steel chainrings themselves on the single speed and 3/4/5 speed ‘Condorinos’ were also webbed to include the ‘L’ in Legnano. Magistroni provided a similar customization to many other prominent Italian bike brands. It is worth noting here that through the 50’s and 60’s, Magistroni stamped the back of both crank arms with the year of production (ie. 63 to denote 1963).  Magistroni also supplied bottom brackets and headsets to Legnano however these were not branded with the Legnano logo.

Balilla
Balilla centerpull brakes branded for Legnano on this 1971 Mod..50 Sportivo. Although Universal brakes were the most widely used brand by Legnano, Universal never personalized their brakesets with the Legnano logo.

Ofmega
An Italian parts manufacturer that supplied Legnano and other Italian brands including Bianchi and Colnago.  You rarely find Ofmega parts on Legnano bikes until the 70’s and on into the 80’s.  Headsets and bottom brackets were common to the Gran Premio and lesser models and sometimes the Ofmega cranksets.  The headset was a particularly attractive component that is sought after by collectors as Ofmega branded it for Legnano (and Frejus) in the knurling of the upper ball race as you can see in the photo above.