Legnano produced two quality road bikes, the Gran Premio and the Roma, or Roma Olimpiade as it was renamed following Ercole Baldini’s gold medal win at the 1956 Melbourne Olympics.  The Roma Olimpiade was the ‘flagship’ model for top competition and the Gran Premio a very close ‘second tier’ road bike for amateur racing and ‘sportif’ riders alike.  The Gran Premio was also produced in greater numbers and imported to North America in greater numbers as it was more affordable.

To make it more affordable, the Gran Premio typically had fewer Campagnolo components than the Roma, dispensing with the pricey Campy crankset, bottom bracket, headset and seat post. Having said that, there is very little otherwise to visually distinguish the Gran Premio frame itself from the Roma Olimpiade, particularly if the paint is worn or if the bike has been repainted. So for anyone purchasing a repainted Legnano bearing Roma Olimpiade decals, you may to read on and take a very close look at your pending purchase.

Serial numbers were stamped on the back of the seat lug for Roma and Roma Olimpiade models.

The ‘apparent’ build quality or detailing differences between the Roma and Gran Premio frame is not obvious with the exception of one feature, the location of the serial number. Legnano assigned a unique alphanumeric serial number, of 6 characters (sometimes 5 if the numeric portion only had 3 digits) to each frame they produced through until the late 1960’s. And from all of my research and investigation, the serial number on the Roma Olimpiade was always placed horizontally, left to right, at the top edge on the back of the seat lug (photo above). The serial number for the Gran Premio was placed vertically, top to bottom, on the right side of the seat post in the same manner as all other Legnano models (photo below).

Serial numbers for Gran Premio models were stamped vertically on the right side of the seat lug.

The different location of the serial numbers may have been done to ensure that the Roma and Gran Premio frames did not get mixed up in the Legnano factory through production prior to paint and decals being applied.  It may also have been done because the more ‘tailored’ fitting of the rear stays to the seat lug on the Roma models does not really leave as much room for the serial number to be stamped on the side of the seat lug.

Both the Gran Premio and Roma models used Campagnolo dropouts front and rear. The lugs and fork crowns are identical. And the reinforcing detail or ‘tange’ on the inside face of the front forks can also be the same on bikes from the 50’s and early 60’s. The plating details on the rear stays, front forks and head tube are also identical between the Gran Premio and Roma models.

It is worth mentioning that the location of the serial number on the side of the seat lug was also used for all of the other bikes that Legnano produced including their ‘Condorino’ models. So if you are buying a repainted Gran Premio be sure to check that it has Campy dropouts, otherwise it could well be a ‘repurposed’ frame from one of their city bikes posing to be something that it is not.

So what are the construction or performance differences between Gran Premio and Roma frames?

As mentioned above, the rear stays on the Roma models have a tailored ‘butt’ fit to the seat lug compared to the side brazing of the Gran Premio rear stays to the seat lug. This difference in construction would result in a stronger and perhaps a stiffer rear triangle on the Roma.

The rear stays on the Gran Premio have a ‘bullet’ shape end and are brazed directly to the set lug.

The rear stays on the Roma frames have been ground and ‘fitted’ to the rounded contour of the seat lug and then brazed.

In addition to the different location of the serial number on the seat lug, the seat lug itself is different on the Roma models with a much longer throat and support for the top tube.  Coupled with the aforementioned different fitting and brazing of the rear stays, the Roma frame would be much stronger and stiffer than the Gran Premio particularly for top competitors.

The seat lug on the Roma (bottom image) has a longer throat for supporting the top tube compared to the Gran Premio (top image).

I didn’t notice this difference until fairly recently as it is a subtle one.  The Gran Premio forks use the Campagnolo Gran Sport dropouts and the Legnano Roma forks are finished with the Campaganolo Strada (later Record) dropouts that are investment cast rather than stamped and less susceptible to bending or misalignment.  It is worth adding that both the Campy Gran Sport and the Campy Strada rear dropouts were investment cast steel, so no substantive difference here. 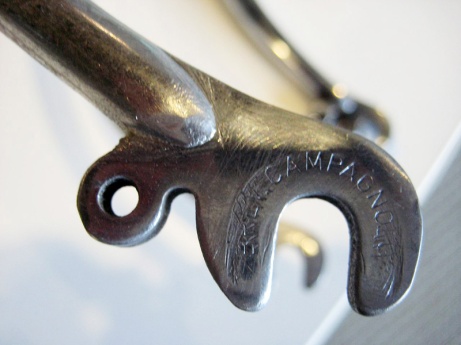 The fork ends on the Gran Premio models use the Campaganolo Gran Sport dropouts that are stamped.

The fork ends on the Legnano Roma models use the Campagnolo Strada dropouts that are investment cast.

What about differences between the frame geometry and tubing on the Gran Premio and Roma models?

Comparing a 56cm Gran Premio frame with the same size Roma frame, the overall center-to-center wheelbase is approx. 2cm shorter on the Roma. The shorter Roma wheelbase reflects a slightly more upright main triangle and there is slightly less rake in the front forks. So we can assume that the Gran Premio is a little less responsive than the Roma frame but also a little more comfortable on rough road surfaces.

Legnano used Falck tubing to build the Roma frames through the 60’s and sometimes into the early 70’s. It could be that a better grade of Falck tubing was used on the Roma frames or perhaps only the three main tubes on the Gran Premio models shared this better quality tubing however it is possible that the tubing could also be identical between the two models.

When I get the opportunity, I will weigh two identically sized Roma and Gran Premio frames of the same year to see if there is any noticeable weight difference. This may give a clue as to any possible tubing differences between the models. Lastly, there is also the possibility that the better or more skilled of the frame builders were assigned to the Roma frame production given the higher price point and lower production quantities.